Featured above: Installation view, Fashion from the Extreme, Museum at FIT

Interest in the natural world flourished during the Victorian era. Thanks to the pioneering works of explorers and naturalists such as Charles Darwin and the wildly popular science fiction books by Jules Verne, quests to reach the poles, the peaks of the highest mountains, the depths of the oceans, and even outer space, became increasingly popular, aspirational endeavors. The Museum at the Fashion Institute of Technology (MFIT) presents Expedition: Fashion from the Extreme (September 15–January 6, 2018), the first large-scale exhibition of high fashion influenced by clothing made for survival in the most inhospitable environments on the planet—and off of it.

On view in Expedition are approximately 70 ensembles and accessories from MFIT’s permanent collection, as well as a compelling selection of objects borrowed from leading museums and private collections. These garments are presented within dramatically designed “environments” in the museum’s Special Exhibitions Gallery. Collectively, the objects and the exhibition design evoke both the beauty of extreme wildernesses—on land and sea, as well as in outer space—and the dangers these locales present to human explorers.

The parka, for example, was invented by indigenous Arctic peoples; then, during the “heroic era” of polar navigation (1890 to 1922), it was appropriated by explorers. Eventually, the parka was redesigned for sports and the military, before finally finding its way into leading fashion magazines. 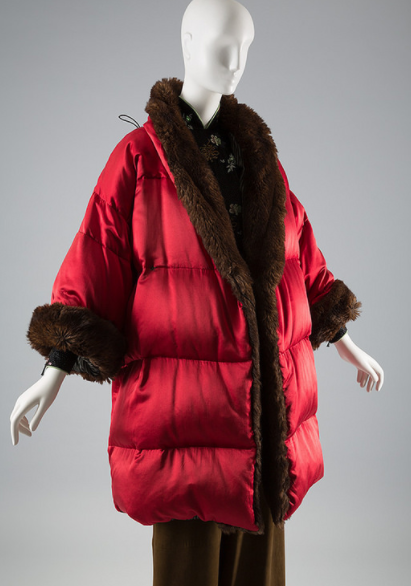 Likewise tracing the progression from strictly utilitarian to fashionable, the exhibition presents an array of down-filled “puffer” coats—perfected for extreme mountain climbing—that includes opulent, high- fashion versions created strictly for show. Experimental, high-tech materials, such as neoprene and Mylar, initially developed for deep sea and outer space exploration, have also made their way onto the world’s most exclusive runways and into this exhibition.

A range of safari clothing are also part of the exhibition, since safaris were the first expedition destinations to be marketed specifically to the well-heeled traveler -  and the clothing created for these excursions would influence fashion designers for decades, from Abercrombie and Fitch to safari-inspired tunics designed by Yves Saint Laurent.

Other extreme environments include the worlds of mountain climbing and deep sea diving and surfing (including the bioluminescent animals that inspired designers like Alexander McQueen, who was also an avid diver). Numerous garments from his spring 2010 collection, titled Plato’s Atlantis, were printed with abstracted images of bioluminescent jellyfish. Two stellar examples from this collection are part of the personal wardrobe of the Honorable Daphne Guinness, who is generously lending these objects to the exhibition.

Finally, the lunar landscape is part of the exhibition, featuring an array of bright and light 1960s fashions by Parisian couturiers, such as Pierre Cardin, André Courrèges, and Paco Rabanne, and American designers, such as Betsey Johnson for Paraphernalia. Several objects with silver, shiny, reflective surfaces were made using materials inspired by Mylar, rather than actual Mylar film. Together, these fashions illustrate the impact of the Space Race between the United States and the Soviet Union that dominated the political and cultural arenas from the 1950s to the early 1970s. Later space-inspired designs by Helmut Lang and Hussein Chalayan round out this section. 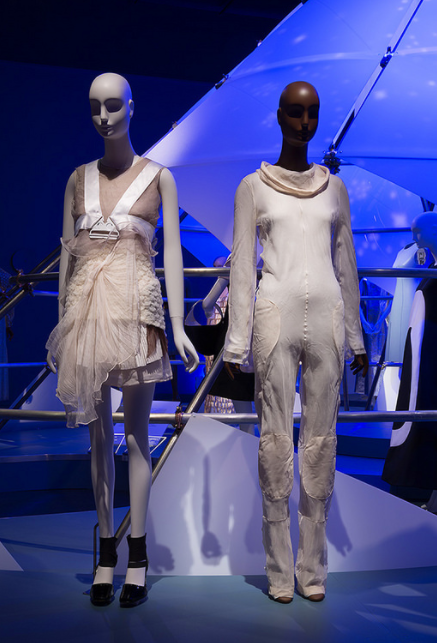 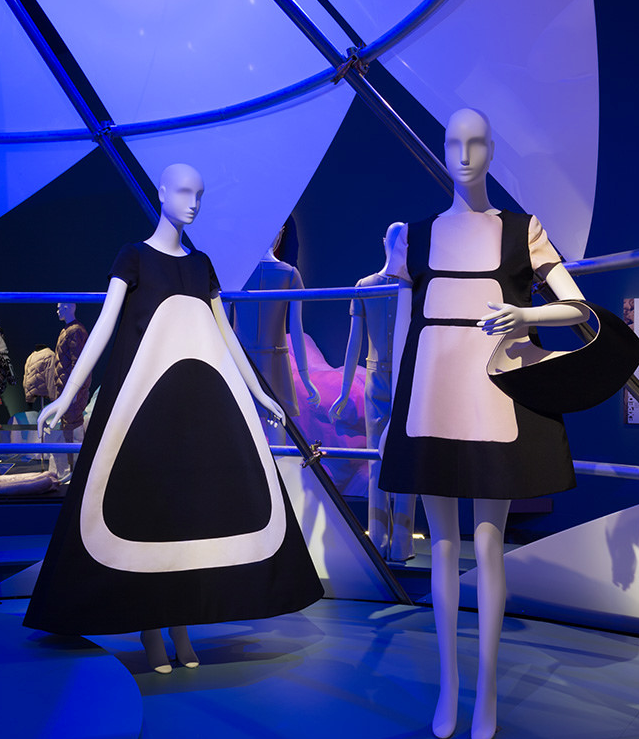